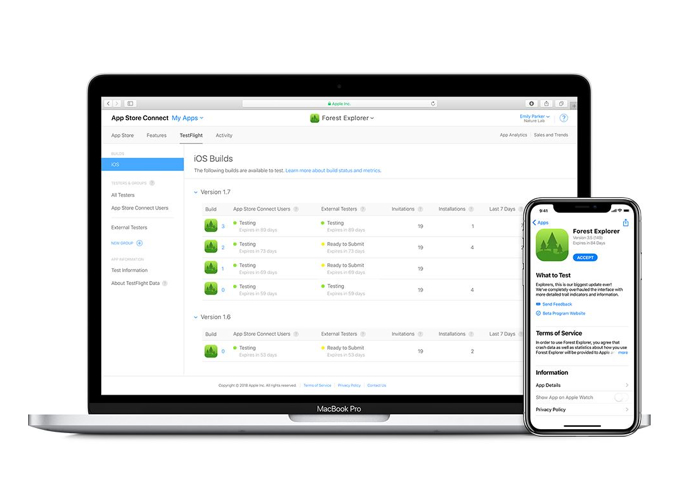 The most anxiously awaited TestFlight feature has arrived! Public links, announced at WWDC back in June, is now available in App Store Connect.

This feature will allow up to 10,000 external testers to access your beta build using a shareable public link, essentially functioning like a limited open invitation. Creating the link in App Store Connect is straight forward. Then, developers can create groups of testers based on which build they want them to have access to. Users simply open the link on their iPhone or iPad and are automatically enrolled in the beta testing group through the TestFlight app.

Before the release of public links, developers had to find email addresses for every tester and then manually send out a beta build invitation to each person individually. This practice was both time-consuming and limiting in terms of reach. Now, developers and customers can share a public link on social media accounts and allow their followers to sign up and test the desired features of the app (or the whole app altogether), before the final version is released publicly in the App Store. This is expected to be hugely beneficial to developers looking for feedback.

The public nature of the new feature doesn’t equate to an uncontrollable free-for-all. To enable the link in the first place, a developer needs to be an Admin or App Manager. Once a public link has been enabled for an external test group in the app’s TestFlight page, developers have the option to impose a limit on the number of testers allowed to use it. They can also disable the public link at any time.

In terms of testers’ privacy, neither their names nor their email addresses are shared with the developer unless they specifically choose to send feedback directly to the developer via email. When someone joins a TestFlight beta group through a shared public link, they’re simply added as an anonymous tester.

The general process of submitting new builds is the same as it has been. Developers can submit subsequent builds, which will appear in the TestFlight app as updates available to install. Like all beta builds, those shared with public links will automatically expire after 90 days.

Copy and paste the link into an email or text message and send to your beta testers.

Step 5: Monitor your Public Links and Individual Testers in your Dashboard