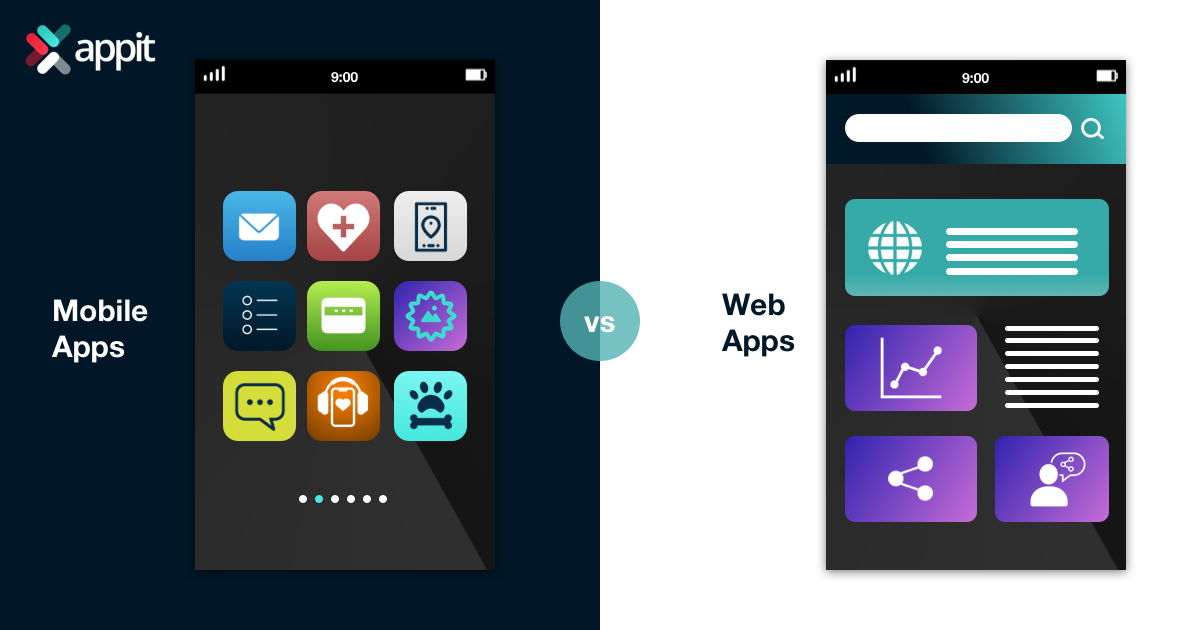 What are the Main Differences Between Mobile Apps and Web Apps?

Mobile apps are typically top-of-mind for most people when it comes to the word, “app.” Consumers can download mobile apps directly from the App Store or Google Play on their smartphones. Mobile apps also may have restricted access to your device’s internal tools, such as its camera or GPS capabilities. In addition, mobile apps are platform-specific, meaning they require unique designs for different mobile operating systems (iOS for Apple’s iPhone and Android for Samsung devices).

Alternatively, web apps live in a device’s internet browser just as websites do. Web apps do not have to be downloaded or installed and they are universal across various platforms. However, because they are not native to devices like mobile apps, they do not have access to a system’s resources like a phone camera, GPS, or contacts. Similar to mobile apps, web apps can be highly responsive and provide a similar User Experience, making them easy to confuse with mobile apps.

While mobile apps and web apps may look and feel the same to a User, they are two completely different products. Identify your primary business goals, take an MVP Approach to development, and research your targeted users’ needs before deciding which application development path to take.

This is a challenging question to answer, as application development costs ultimately depend on how complex a product is.

‍Monetization is relatively simple for both mobile apps and web apps. Mobile apps listed on an app store can require a user to pay before downloading. Additionally, they can provide in-app subscription models (such as Premium or Plus versions) that cost money, even if the app itself is free. Similarly, web apps live in internet browsers, can feature ads, promotions, and subscription options.

Which is More User-Friendly: Mobile Apps or Web Apps?

When it comes to User Experience (UX), native mobile apps are typically faster and more reliable than web apps because they don’t require an active internet connection in order to run.

Web apps rely on an online connection and are oftentimes slower and less efficient than native mobile apps. They also tend to be less advanced in their feature set.

‍ In the matter of application updates, however, web apps have the advantage. While mobile apps require users to manually download periodic updates, web apps will auto-update on a regular basis.

How is a Web App Different from a Website?

Web apps are designed specifically to be viewed on mobile devices, so they function more like a native app than a website. That is, they are typically faster and more responsive than a traditional website when viewed on a mobile device. Additionally, web apps are created for user interaction, as opposed to websites that are static and universal regardless of user or device.

What is a Progressive Web App (PWA)?

Think of progressive web apps like blended mobile and web applications; they are accessible through web browsers, but behave more like native mobile apps. An enhancement from the traditional web application, progressive web apps offer increased loading speeds and offline functionality. Some may even offer native mobile app features like push notifications, video capture, and playback.

What Platforms are Mobile Apps and Web Apps Built on?

Both web apps and mobile apps are built for various platforms, including iOS and Android, but they differ in their universality. Mobile apps require different versions depending on the platform and thus are developed in platform-specific languages, such as Swift for iOS apps and JavaScript for Android apps.

Web apps are simpler to build in that they only require one cross-platform version, typically written in languages such as JavaScript, CSS, or HTML5.

What’s the Difference Between a Native Mobile App and a Hybrid Mobile App?

Hybrid mobile apps provide an alternative somewhere in-between native mobile apps and web apps. Similarly to native apps, hybrid mobile apps are installed onto devices via app stores, but they run using a Webview browser within the app and are written using programs such as CSS, JavaScript, and HTML (just as websites are).

They are popular with small companies and startups because they are written with a code that is universal across all operating systems, but their functionality is comparable to native apps, including their ability to access device tools. ‍

Evernote is an example of a popular hybrid mobile app.

What are the Pros and Cons of Mobile Apps and Web Apps?

So which application development path is better suited to meet your requirements? Ultimately, the decision depends on your unique needs and user base. While going through the process of deciding on an app development platform, it is important to consider factors such as cost, time, functionality, and user requirements.

For additional resources, check out our new Mobile App Development eBook, or schedule a consultation with our team to discuss your next project.

You Might Also Enjoy These Articles on Application Development:

What Makes a Successful Development Project?